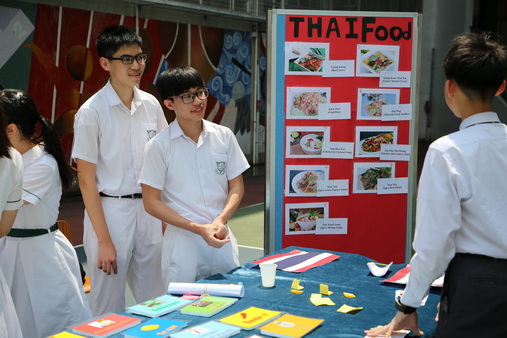 The English Speaking Week was held from 8-12 April, 2019, the whole school had to use English during this entire week! Several engaging activities were held during the week to encourage students to speak in English at the school campus. Here are the highlights of the activities.
Food bazaar game stalls were organized on the first day of the English Speaking Week by S4 students at lunchtime to promote the idea of using English in daily life. The different tolls were based on different topics including famous cuisines in several countries, such as American, British, Mexican, Italian, etc.
Besides, the parents from the PTA also volunteered to set-up a redemption booth for students serving – cotton candies!
The second day was the school Refreshing Day and the theme is playing English Songs. Our A Cappella groups – Fuoco & Basil gave fabulous performances of a variety of English Songs. The school atmosphere was enlightened with their music in the podium.
On the third day, S2 students had drama performances with the theme – fairytales. All S1 and S2 students enjoyed and appreciated the performances. Some prizes were given by the judges to encourage and motivate the best performing students.
On the fourth day, the English Drama Club staged a play on the pursuit of one’s dream to students called – Dream Chaser. The team consisted of 33 members, including 9 actors and backstage helpers. The audience (S3 and S4) students really appreciated it and they had a chance to ask questions to the performing students.Lastly, Friday English Platform took place at lunchtime and the theme was – Easter. The 3 NETs designed the activities at Easter. Attractive prizes such as chocolates and drinks were given to well-performing students